Helicorp provides all people, regardless of age and physical ability, the opportunity to experience New Zealand and our remote regions without leaving any lasting trace or requiring infrastructure such as roads or tracks. 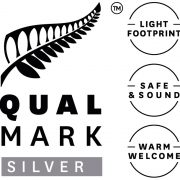 In 2016 Helicorp gained a Qualmark Enviro Bronze Award and we are delighted to have recently been awarded a Silver Sustainable Tourism Business Award upon our annual re-evaluation by Qualmark.

We are continually working on raising our high standards of practices and the upgraded award status is a great result and acknowledgement of the ongoing improvements within our business.

Qualmark is an official endorsement awarded by Tourism New Zealand and is designed to identify professional and trustworthy operators to enable international and domestic visitors to book and buy tourist products and services with confidence.

The New Zealand Civil Aviation Authority (CAA) make sure everyone involved in New Zealand aviation meets the legal standards set by the Minister of Transport.

Helicorp is regularly audited by the CAA and have been certificated Part 119/135.